Aidy Bryant is an American actress and comedian. She is best known as a cast member on the late-night live television sketch comedy and variety show Saturday Night Live, for which she has been nominated for two Primetime Emmy Awards, including for Outstanding Supporting Actress in a Comedy Series. She provided the voice of D.D. Danger in the animated series Danger & Eggs and starred in the sitcom Shrill. Aidy had a cameo role in the 2014 sequel to The Amazing Spider-Man and appeared in I Feel Pretty with Amy Schumer. 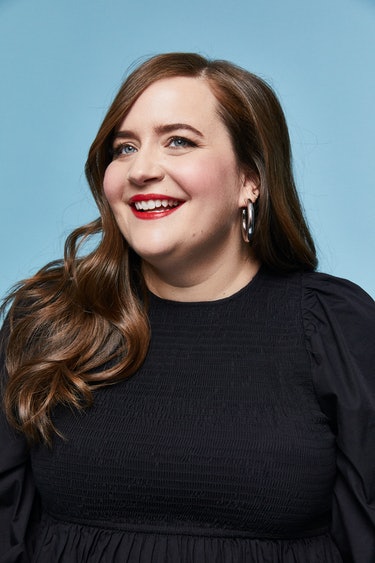 Born Aidan Mackenzy Bryant on May 7, 1987 in Phoenix, Arizona, to parents Georganne Vinall and Tom Bryant, she has one younger brother named Patrick. Aidy attended the Xavier College Preparatory School, and received a BA in Theater in 2009 from Columbia College. She began her comedic training at iO Chicago while in college. In April 2018, Aidy married her boyfriend of 10 years Conner O’Malley in an intimate ceremony following a 2-year-long engagement.

Aidy Bryant Facts:
*Born on May 7, 1987 in Phoenix, Arizona, she is of English, Irish, German, and Scottish descent.
*She developed an interest in performing during middle school theater classes and summer camps, where she learned about improvisation.
*She made her SNL debut in the show’s 38th season.
*She attended the same high school as fellow Arizonan Meghan McCain.
*Follow her on Instagram.