Ashley Madekwe is a British actress. She is best known for starring as call girl Bambi in the ITV2 series Secret Diary of a Call Girl, social climber Ashley Davenport on the ABC drama series Revenge and the witch Tituba in the WGN America series Salem. She played Toni in the 2019 film County Lines, for which she was nominated for the BAFTA Award for Best Actress in a Supporting Role in 2021. Madekwe’s other notable works include Teachers, Drop Dead Gorgeous, Trexx and Flipside, The Beautiful Life: TBL, Bedlam, The Umbrella Academy, Four Weddings and a Funeral, Tell Me A Story, and Tell Me Your Secrets. 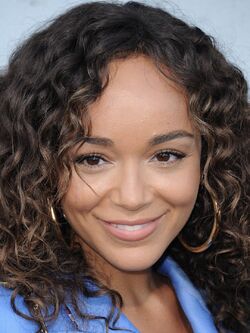 Born Ashley Ifeoma Madekwe on December 6, 1983 in London, United Kingdom, into an interracial family, her mother is English and her father is Nigerian. Madekwe grew up on a south London council estate and attended The Brit School at age 14. She graduated with a Bachelor’s of Arts degree in acting from the Royal Academy of Dramatic Art, London. She began her acting career with a film titled Storm Damage. She married Israeli actor Iddo Goldberg on June 17, 2012.

Ashley Madekwe Facts:
*She was born on December 6, 1983 in London, United Kingdom.
*She is the cousin of Archie Madekwe.
*She appeared in numerous stage productions while attending the school.
*She starred as Bambi/Gloria White in Secret Diary of a Call Girl from 2007 to 2010.
*She is the founder and contributor to a successful fashion blog Ring My Bell (ashley-ringmybell.com).
*Follow her on Twitter, Facebook and Instagram.