Aleksa Palladino is an American actress and singer. She is best known for her roles in the films Manny & Lo, The Adventures of Sebastian Cole, Find Me Guilty, Wrong Turn 2: Dead End, and Before the Devil Knows You’re Dead. She is also known for her recurring role as Angela Darmody in the HBO period drama series Boardwalk Empire (2010–2011). Palladino was also a series regular of season two in the AMC period drama Halt and Catch Fire as Sara Wheeler. She was the lead vocalist of the band EXITMUSIC, which she formed with her husband Devon Church. They released their first album in 2012. 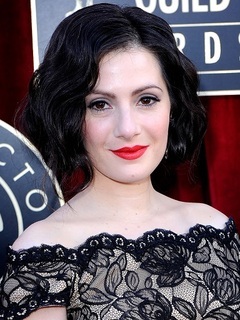 Aleksa Palladino Facts:
*She was born on September 21, 1980 in New York City, New York, USA.
*She is the only child of filmmaker, soprano singer, photographer, graphic artist, and producer Sabrina A. Palladino, and the granddaughter of Sicilian painter and sculptor Angela Fodale Palladino and the Italian-American illustrator and graphic designer Anthony Americo “Tony” Palladino, who designed the lettering for Robert Bloch’s 1959 novel Psycho.
*She made her screen acting debut at the age of 14.
*She co-founded the band EXITMUSIC in 2003.
*She was married to Devon Church from 2003 until 2015.
*She is good friends with Binki Shapiro.