Natalie Wood was an American actress, best remembered by the public for her role as Maria in the movie West Side Story in 1961. She won a Golden Globe Award for her performance in the 1979 remake of From Here to Eternity. Other high-profile films included Miracle on 34th Street, Splendor in the Grass, Rebel Without a Cause, Bob & Carol & Ted & Alice, The Searchers, and Love with the Proper Stranger. Born Natalia Nikolaevna Zakharenko on July 20, 1938 in San Francisco, California, to Maria and Nicholas Zakharenko, who were Russian-born immigrants, of Ukrainian and Russian descent. She made her film debut at age four in the film, Happy Land (1943). As a teenager, she was nominated for an Academy Award for Best Supporting Actress her performance in Rebel Without a Cause. Her younger sister, Svetlana Zacharenko also became an actress using the stage name Lana Wood. She was married to Robert Wagner from 1957 to 1962 and then again from 1972 to 1981. She was also married to Richard Gregson for a short time. She had daughters named Natasha Gregson Wagner and Courtney Brooke Wagner. 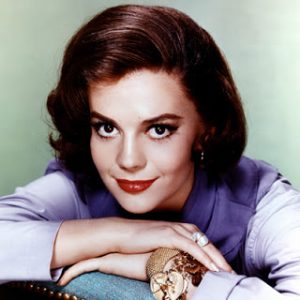 Natalie Wood Facts:
*She was born on July 20, 1938 in San Francisco, California to Russian and Ukrainian immigrants.
*She was named after director Sam Wood.
*She was fluent in Russian and English.
*Her favorite singer was Bob Dylan and her favorite actress was Vivien Leigh.
*She was commonly listed as 5′ 3″ wearing heels in movie magazines, though her actual height was 5′ 2″.
*She was named one of the top sex stars of the 1970s in Playboy magazine.
*She was placed at #70 in the list of “100 greatest stars of all time” by Entertainment Weekly.