Alex Meneses is an American actress, and former model. She is best known for the television work on series such as Dr. Quinn, Everybody Loves Raymond, and Medicine Woman. She has also appeared in such films as Selena, Amanda and the Alien, The Flintstones in Viva Rock Vegas and Auto Focus. Born Alexandra Estella DeAnna Meneses on February 12, 1965, in Chicago, Illinois, to parents Miroslawa and Luis Manuel Meneses, she is of Mexican descent on her father’s side, and of Ukrainian descent on her mother’s side. She studied acting at Chicago’s The Second City Improvisational Theater during summer vacations. She worked as a model in Italy for two years before becoming an actress. She was married to John H. Simpson from 2004 to 2015. She has a daughter named Stella. 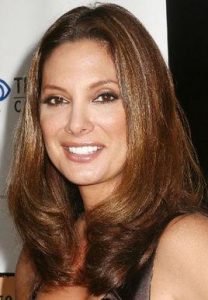 Alex Meneses Facts:
*She was born on February 12, 1965, in Chicago, Illinois.
*Her father was from Mexico City, Mexico while her mother was born in Illinois, USA.
*She was a dancer for fourteen years.
*She was inspired by Latina actress, Rita Moreno, to pursue a career in acting.
*In her free time, she enjoys cooking, hiking, rollerblading and traveling home to Chicago to visit her family.
*She is the founder and CEO of her own production company OOLaLa Productions/LADDS Entertainment.
*Follow her on Twitter, Facebook and Instagram.