Sally Field is an American actress, singer, director, producer, and screenwriter. She is best known for her roles in television, such as Brothers & Sisters, The Flying Nun, ER, Gidget, A Woman of Independent Means, Sybil, A Cooler Climate, and The Girl with Something Extra, and in the films Lincoln, Forrest Gump, Norma Rae, Smokey and the Bandit, and Places in the Heart. Her accolades include two Academy Awards, two Golden Globe Awards, three Primetime Emmy Awards, and a Screen Actors Guild Award. She has also been nominated for a Tony Award and two BAFTA Awards. Born Sally Margaret Field on November 6, 1946 in Pasadena, California, USA, to actress Margaret Field and salesman Richard Dryden Field, her parents divorced in 1950 and her mother then married stuntman Jock Mahoney. She was educated at Birmingham High School in Van Nuys, California. She married Steven Craig in 1968, and they had two sons: Eli Craig, an actor and director, and Peter Craig, a novelist, before getting divorced in 1975. She married producer Alan Greisman in 1984, and the couple had one son, Sam, in 1987, before divorcing in 1993. She was romantically linked to Burt Reynolds from 1977 to 1982. 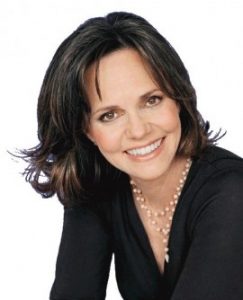 Sally Field Facts:
*She was born on November 6, 1946 in Pasadena, California, USA as Sally Margaret Field.
*She belongs to English, Irish, German, and Dutch descent.
*She was a cheerleader at her school.
*She supported Hillary Clinton in her presidential campaign in 2008.
*She is longtime friends with Pat Mitchell and good friends with Goldie Hawn.
*Follow her on Twitter and Facebook.