Alex Morgan is an American soccer player who plays for Orlando Pride in the NWSL and the United States women’s national soccer team. The star forward has already played a World Cup, an Olympic Games and has passed 100 appearances for the team. She is olympic gold medalist, and FIFA Women’s World Cup champion. She helped the U.S. women’s team win the 2015 World Cup. Alex was born on July 2, 1989 as Alexandra Patricia Morgan in Diamond Bar, California, to Pamela S. and Michael T. Morgan. She has two older sisters named Jeni and Jeri. She has been married to Servando Carrasco since December 31, 2014. 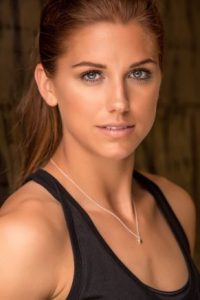 Alex Morgan Facts:
*She was a member of gold medal-winning Team USA in the 2012 London Olympics.
*She was the first overall pick in the 2011 WPS Draft by the Western New York Flash.
*Time magazine declared her the highest earning female soccer star in 2015.
*She has endorsement deals with Nike, Coca-Cola, ChapStick, Bridgestone and Panasonic.
*She has had her fair share of magazine spreads, including the 2012 Sports Illustrated Swim Suit edition, where she was seen in the section of athletes in body paint.
*Follow her on Twitter, Facebook and Instagram.