Alexander Skarsgard is a Swedish actor. He is best known for television roles such as Eric Northman in True Blood, Brad “Iceman” Colbert in Generation Kill, Perry Wright in Big Little Lies, and Randall Flagg in The Stand. His notable films include Melancholia and The Legend of Tarzan. 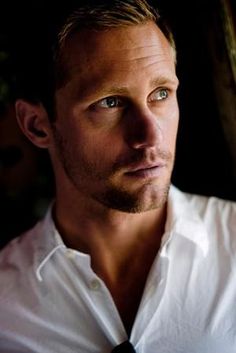 Born Alexander Johan Hjalmar Skarsgård on August 25, 1976 in Vällingby, Stockholm, Sweden, he is the eldest son of actor Stellan Skarsgård and My Skarsgård. Among his siblings are actors Gustaf Skarsgård, Valter Skarsgård, and Bill Skarsgård. He dated Alexa Chung from 2015 to 2017.

Alexander Skarsgard Facts:
*He was born on August 25, 1976 in Vällingby, Stockholm, Sweden.
*He started acting at the age of 7.
*He spent 18 months in Sweden’s military.
*His first big break was with the miniseries Generation Kill (2008).
*He earned a Primetime Emmy Award, a Golden Globe Award and a Screen Actors Guild Award for his role as Perry Wright in the television series Big Little Lies.
*His favorite actress is Isabelle Huppert and his favorite actor is Gary Oldman.
*He has been named Sweden’s Sexiest Man five times.
*His favorite movie is Duck Soup (1933).
*He is a fan of Robert Duvall.
*He is fluent in French, Swedish, and English.
*He supports Swedish football club, Hammarby IF.
*He identifies as a feminist.