Alexander Zverev is a German professional tennis player who broke into the ATP top 50 at just the age of 18, and won a junior Grand Slam singles title at the 2014 Australian Open. He achieved a career-high singles ranking of World No. 3 on November 6, 2017. Zverev has won 11 ATP titles in singles and two in doubles. As of May 2018, Zverev is the only active player other than the Big 4 (Federer, Nadal, Murray, and Djokovic) to own three or more Masters 1000 titles. Born on April 20, 1997 in Hamburg, Germany, into a tennis family, he is the son of Irina and Alexander Mikhailovich Zverev. His older brother Mischa is also a tennis player. Zverev started playing tennis at the age of five, and became the youngest player to win two consecutive Masters 1000 titles on different surfaces since the format started in 1990. 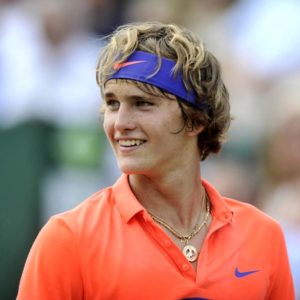 Alexander Zverev Facts:
*He was born on April 20, 1997 in Hamburg, Germany.
*Both of his parents played professionally for the Soviet Union.
*He began playing tennis at age 5.
*He turned pro in 2013.
*He won a junior Grand Slam singles title at the 2014 Australian Open.
*At 20 years old, Zverev was the youngest player to debut in the top 20 since Djokovic.
*At age 4, he met Rafael Nadal and Novak Djokovic.
*At age 5, Zverev took a photograph with Roger Federer at the Hamburg Masters.
*He is the first player born in the 1990s to win multiple Masters 1000 titles.
*His best friend on the tour is Brazilian doubles specialist Marcelo Melo.
*He speaks German, Russian, and English.
*Follow him on Twitter, Facebook and Instagram.