Alexis Denisof is an American film and television actor. He is best known for his portrayal of Wesley Wyndam-Pryce in the television series Buffy the Vampire Slayer and its spin-off Angel, and for his recurring role as Sandy Rivers on How I Met Your Mother. His other notable appearances include: The Avengers (2012 film), Love, Wedding, Marriage, Grimm, Finding Carter, and Legacies. Born on February 25, 1966 in Salisbury, Maryland, to parents Gerald Denisof and Dr. Christiana Taylor, he belongs to Russian, French, and Irish descent. He attended a boarding school in New Hampshire at the age of 13. He has been married to Alyson Hannigan since October 11, 2003. They have two daughters; Satyana Marie Denisof (b. March 2009) and Keeva Jane Denisof (b. March 2012). 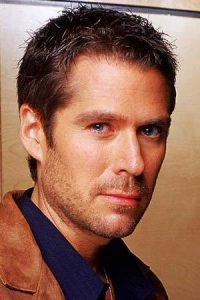 Alexis Denisof Facts:
*He was born on February 25, 1966 in Salisbury, Maryland, USA.
*He has Russian, French, and Irish ancestry.
*His mother has a PhD and teaches Drama in Seattle.
*He was raised in Seattle, and spent 3 years studying at the London Academy of Music and Dramatic Art.
*He attended the exclusive St. Paul’s boarding school in New Hampshire.
*He was considered for the role of James Bond in Casino Royale.
*He married his Buffy the Vampire Slayer and Angel co-star Alyson Hannigan at Two Bunch Palms Resort in Desert Hot Springs, California, on October 11, 2003.
*Follow him on Twitter and Instagram.