Ali Bastian is an English actress best known for playing the role of Becca Dean in the Channel 4 soap opera Hollyoaks from 2001 to 2007. She is also known for her portrayal of Sally Armstrong on ITV’s The Bill, and for her role as Becky Clarke on the BBC daytime series Doctors. In 2017, Bastian played Alice & Nina in the British comedy film Who Is Alice. Born Alexandra Louise Bastian on February 27, 1982 in Windsor, Berkshire, England, to parents Paula C. Marriott and Nicholas P. Bastian, she has one younger brother named Nicholas. At age 10, Bastian began her acting training at the Redroofs Theatre School in Maidenhead, England. She dated Kevin Sacre, Brian Fortuna and was engaged to musician Tom Clay in 2013. She married fellow actor David O’Mahony in February 2019. 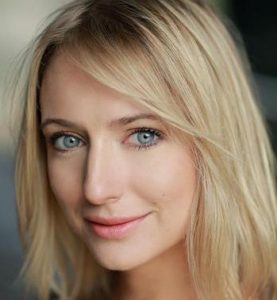 Ali Bastian Facts:
*She was born on February 27, 1982 in Windsor, Berkshire, England, UK.
*Her parents are Nicholas P. Bastian and Paula C. Marriott.
*She played the part of Becca Dean in Hollyoaks from 2001 to 2007.
*From 2007 to 2009, she played PC Sally Armstrong in the long-running ITV police drama The Bill.
*She played Becky Clarke in the BBC drama series Doctors from 5 February 2019 to 6 November 2019.
*She was signed to Storm Models.
*In 2013, she was engaged to musician Tom Clay.
*Follow her on Twitter and Instagram.