Actress who became recognized for her role in the 1969 film Goodbye, Columbus. She later gained much recognition by portraying the role of Jennifer Cavalleri in the 1970 film Love Story. She has also played prominent roles in the films The Getaway, The Winds of War, and Convoy. Ali was born to commercial artists Frances and Richard MacGraw, on April 1, 1939 in Pound Ridge, New York, USA as Elizabeth Alice MacGraw. She has one brother named Dick, is also an artist. 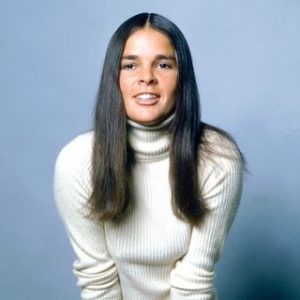 Ali MacGraw Facts:
*She is of Scottish descent on her father’s side.
*She worked at Harper’s Bazaar magazine as a photographic assistant.
*One of People magazine’s 50 Most Beautiful People in the World (1991).
*She is an animal rights activist, she filmed a public service announcement for People For the Ethical Treatment of Animals (PETA) in July 2006.