Anupam Kher is an Indian actor who appears mainly in Hindi films. Kher made his acting debut with the 1982 film Aagman. Since then he has appeared in over 500 films. He was born on March 7, 1955 in Shimla, Himachal Pradesh, India. He belongs to Kashmiri Pandit family. His parents are Pushkarnath Kher and Dulari Kher. He has been married to actress Kirron Kher since 1985. He was previously married to Madhumalati. 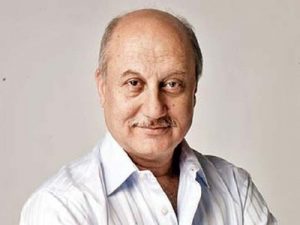 Anupam Kher Facts:
*He belongs to Kashmiri Pandit family.
*His wife Kirron Kher, is also an actress as well as a Member of the Indian Parliament from Chandigarh.
*He launched his own entertainment company in 1994.
*He became the first person to win five Filmfare Awards for Best Performance in a Comic Role.
*Follow him on Twitter, Facebook and Instagram.