Alison Eastwood is an American actress, fashion model, and fashion designer who rose to prominence by portraying the role of Amanda Block in the 1984 thriller Tightrope. Her other film roles include Henry, Shadow People, and Breakfast of Champions. She is the founder of the Eastwood Ranch Foundation, a non-profit animal welfare organization. Born in Carmel, California, she is the daughter of Actor/director Clint Eastwood and Maggie Johnson, and has a brother, and six half-siblings. On March 15, 2013, she married to sculptor Stacy Poitras. She was previously married to Kirk Fox from 1999 to 2000. 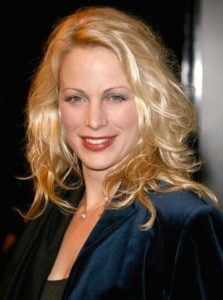 Alison Eastwood Facts:
*She is the daughter of screen legend Clint Eastwood.
*She was born prematurely by 15 days.
*Founder of the Eastwood Ranch Foundation, a non-profit animal welfare organization.
*She posed nude for the February 2003 issue of Playboy. Its caption read, “Wanna get lucky?”
*Her father, Clint, bought her a BMW for her 17th birthday.