Owain Yeoman is a Welsh actor. He is best known for television roles such as Lucas Dalton in The Nine, Steven Daedalus in Kitchen Confidential, Wayne Rigsby in The Mentalist, Benedict Arnold in Turn: Washington Spies, Sgt. Eric Kocher in Generation Kill, and Benny Gallagher in Emergence. His film credits include The Belko Experiment, Brahms: The Boy II, and SAS: Red Notice. 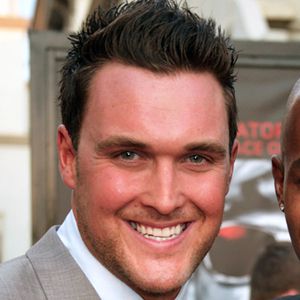 Born Owain Sebastian Yeoman on July 2, 1978 in Chepstow, United Kingdom, to parents Hilary and Michael Yeoman, he has a sister named Ailsa. He studied English Literature & Language at Oxford University in England, and graduated from the Royal Academy of Dramatic Arts in London. Yeoman married jewellery designer Gigi Yallouz in September 2013. Together they have one daughter, Ever Belle Yeoman. He was previously married to actress Lucy Davis from December 2006 to October 2011.

Owain Yeoman Facts:
*He was born on July 2, 1978 in Chepstow, United Kingdom.
*He is a classically trained actor.
*He worked as a banker in Canary Wharf, London.
*He has a degree in English from Brasenose College, Oxford.
*He made his film debut as Lysander in the Oscar nominated film Troy (2004).
*He is a vegetarian and was photographed for PETA’s vegetarianism campaign.
*He speaks intermediate Welsh, A-level French and German.
*He is an avid animal rights supporter and works closely with PETA and The Humane Society of The United States.
*He has a French Bulldog Cash.
*Follow him on Twitter and Instagram.