Amanda Beard is an American swimmer who won seven Olympic medals, including two gold, four silver, and one bronze. Beard is a former world record holder in the 200-meter breaststroke. Her success has earned her the American Swimmer of the Year Award twice. On April 3, 2012, Beard released an autobiography entitled In the Water They Can’t See You Cry: A Memoir. Born Amanda Ray Beard on October 29, 1981 in Newport Beach, California, to parents Gayle and Dan Beard, her sister, Taryn, is a swim coach. She is married to photographer Sacha Brown. They have two children. 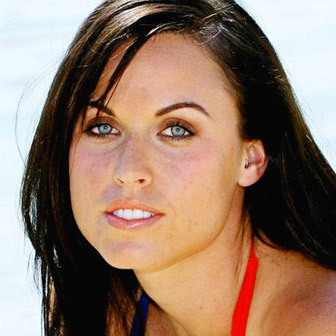 Amanda Beard Facts:
*She was born on October 29, 1981 in Newport Beach, California, USA.
*She attended Irvine High School and The University of Arizona.
*At age 14, she won her first gold medal at the 1996 Olympic games in Atlanta, Georgia.
*She has won a total of 21 medals in major international competition, 5 gold, 13 silver, and 3 bronze spanning the Olympics, the World Championships, the Pan Pacific Championships, and the Summer Universiade.
*She ranked #79 in FHM’s “100 Sexiest Women in the World 2005” special supplement.
*She is a vegetarian.
*Visit her official website: www.amandabeardofficial.com
*Follow her on Twitter and Instagram.