Maya Rudolph is an American actress, comedian and singer who was a cast member on the NBC television show Saturday Night Live from 2000 to 2007. She also starred as Ava Alexander on the NBC sitcom Up All Night from 2011 to 2012 and has appeared in many films, notably Grown Ups, Grown Ups 2, Bridesmaids, Inherent Vice, Sisters, CHiPs, Wine Country, 50 First Dates, A Prairie Home Companion and Idiocracy. In 2016, Rudolph co-hosted her own variety series Maya & Marty with Martin Short. She also provided her voice to the animated films Shrek the Third and Big Hero 6. Born Maya Khabira Rudolph on July 27, 1972 in Gainesville, Florida, she is the daughter of singer Minnie Riperton and music composer Richard Rudolph. She is of Ashkenazi Jewish descent on her father’s side, and of African-American descent on her mother’s side. Her older brother Marc Rudolph is a music engineer. Rudolph attended the University of California, Santa Cruz, where she graduated in 1995 with a Bachelor of Arts degree in photography. She first achieved fame as a member of the alternative rock band The Rentals in the mid-1990s. She has been in a relationship with Paul Thomas Anderson since 2001. They have four children, Jack, Lucille, Pearl and Minnie. 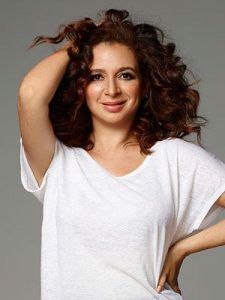 Maya Rudolph Facts:
*She was born on July 27, 1972 in Gainesville, Florida, USA.
*She is the daughter of Minnie Riperton and Richard Rudolph.
*Her mother died when Maya was just six years old.
*Her godmother was R&B singer Teena Marie.
*She is childhood friends with Gwyneth Paltrow and Jack Black.
*She graduated from the University of California-Santa Barbara with a Bachelor’s degree in Photography.
*She is friends with Kristen Bell.
*Her mother died when Maya was just seven years old.
*Follow her on Twitter and Instagram.