Amanda Hearst is an American fashion model, socialite, activist, and heiress to William Randolph Hearst’s media empire. She has appeared on the cover of fashion magazines such as Cosmopolitan, Town & Country and International Harper’s Bazaar. She modeled a new line of ethical fashion designed by Liya Kebede in 2012. Born Amanda Randolph Hearst on January 5, 1984 in New York City, to Richard McChesney and Anne Hearst, she has one brother, King Randolph Harris. She is the niece of kidnap victim Patricia Hearst and great-granddaughter of media mogul William Randolph Hearst. After graduating from Choate Rosemary Hall, a boarding school in Wallingford, Connecticut in 2002, she enrolled at Boston College, and was later transferred to Fordham University where she studied Art History. 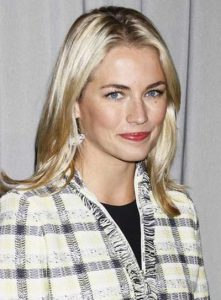 Amanda Hearst Facts:
*She was born on January 5, 1984 in New York City.
*Her father separated from her mother, before her birth.
*She was voted 7th hottest billionaire heiresses by Forbes Magazine.
*Her stepfather, Jay McInerney, was a novelist.
*She is the founder of Friends of Finn, an organization dedicated to stopping the inhumane treatment of dogs in puppy mills.
*Follow her on Twitter and Instagram.