Jenna Fischer is an American actress of film and television. She is best known for portraying Pam Beesly on the NBC sitcom The Office from 2005 to 2013, for which she received a 2007 Emmy Award nomination. Fischer has also appeared in such films as Blades of Glory, Walk Hard: The Dewey Cox Story, Hall Pass, The Promotion and The Giant Mechanical Man. She has made guest appearances in a number of television shows including, Six Feet Under, Miss Match, Strong Medicine, Undeclared, That ’70s Show, Cold Case, What I Like About You, and Off Centre. In 2018, she began starring in the ABC sitcom, Splitting Up Together. Born Regina Marie Fischer on March 7, 1974 in Ft. Wayne, Indiana, to Anne and Jim Fischer, she has one younger sister named Emily. She attended Pierremont Elementary School in Manchester, Missouri, and Nerinx Hall High School, in Webster Groves, Missouri. She graduated from Truman State University in Kirksville, Missouri. Her first paying film role was a sex education video released by the UCLA Medical Center. She made her debut as a professional actress in the 1998 film Born Champion. She married Lee Kirk in 2010. They have two children. She was previously married to James Gunn from 2000 to 2008. 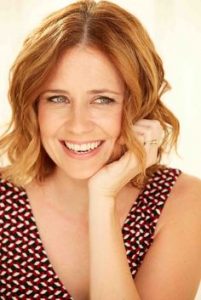 Jenna Fischer Facts:
*She was born on March 7, 1974 in Ft. Wayne, Indiana.
*In 2009, she was named an official spokeswoman for Proactiv Skincare Solutions.
*People Magazine named her one of the top 100 Most Beautiful People in the World in 2006.
*She used to work as a receptionist in various offices.
*She is an avid fan of the St. Louis Cardinals baseball team, and a fan of the NFL’s Dallas Cowboys.
*She is best friends with Angela Kinsey.
*Follow her on Twitter, Facebook and Instagram.