Amy Grant is an American singer-songwriter, musician, author and media personality, best known for Christian contemporary songs such as “Father’s Eyes,” “El Shaddai” and “Angels.” Her single, “Baby Baby” reached #1 on the Radio & Records Chart for three weeks. Her other hits include “Every Heartbeat”, “That’s What Love Is For” and “Good for Me”. Born Amy Lee Grant on November 25, 1960, in Augusta, Georgia, USA, she is the youngest of four daughters to Gloria and Burton Paine Grant. She attended and graduated from Harpeth Hall, an all girls private school. She began her career with Myrrh Records in Nashville, Tennessee at age fifteen. She recorded her first album “Amy Grant” in 1977, produced by Brown Bannister. Her 1991’s album “Heart in Motion”, produced the hit singles “Baby Baby”, “That’s What Love Is For”, “Every Heartbeat” and “Good for Me”, all of which made it into the top ten of the Billboard Hot 100. She has been married to Vince Gill since March 10, 2000. She was previously married to Gary Chapman. She has a son named Matthew and three daughters named Gloria, Corrina and Sarah. 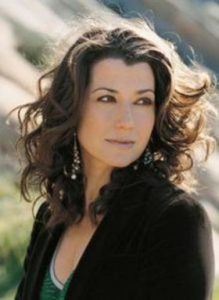 Amy Grant Facts:
*She was born on November 25, 1960, in Augusta, Georgia, USA.
*She is the youngest child in her family.
*She began her career at the age of 15 with Myrrh Records in Nashville, Tennessee.
*She is referred to as “The Queen of Christian Pop”.
*She was a member of the Kappa Alpha Theta sorority at Vanderbilt University.
*People Magazine named her one of the top 50 Most Beautiful People in the World in 1992.
*She is an avid golfer.
*She is good friends with Michael W. Smith.
*Amy’s daughter Gloria Mills Chapman donated one of her kidneys to her life-long best friend Kathryn in January 2017.
*Visit her official website: www.amygrant.com
*Follow her on Twitter, Facebook, YouTube and Instagram.