Amy Jo Johnson is an American-Canadian actress, singer, songwriter, musician, and director. She is best known for television roles as Kimberly Ann Hart / The Pink Ranger on Mighty Morphin Power Rangers, Julie Emrick on Felicity and Jules Callaghan on Flashpoint. Her notable film appearances include: Lines, Bent, Pursuit of Happiness, and The Space Between. Johnson released her debut album The Trans-American Treatment in January 2001. Born on October 6, 1970 in Hyannis, Massachusetts, USA, to parents Christine and Greig Johnson, Sr., she has two older siblings, a brother, Greig Johnson, Jr., and a sister named Julie Johnson-Clary. She was raised in Dennis, Massachusetts and attended Dennis-Yarmouth Regional High School. She studied gymnastics as a child. She is married to Olivier Giner, with whom she has a daughter named Francesca born in 2008. 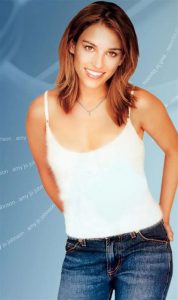 Amy Jo Johnson Facts:
*She was born on October 6, 1970 in Hyannis, Massachusetts, USA.
*She has two older siblings, Greig Johnson, Jr. and Julie Johnson-Clary.
*On August 19, 1998, her mother died of uterine cancer, with which she had struggled for 10 months.
*She became a Canadian citizen in June 2015.
*She is left-handed.
*She plays the guitar and piano.
*She enjoys music, painting, and writing.
*Her favorite musicians: Grateful Dead, James Taylor, The Beatles, Natalie Merchant, Sarah McLachlan, The Allman Brothers Band and Jewel Kilcher.
*Visit her official website: www.amyjojohnson.com
*Follow her on Twitter, YouTube, Facebook and Instagram.