Amy Schumer is an American stand-up comedian and actress. She is best known for her sketch comedy series, Inside Amy Schumer, which she launched in 2013. She wrote and starred in the 2015 summer comedy hit Trainwreck, for which she received nominations for the Writers Guild of America Award for Best Original Screenplay and the Golden Globe Award for Best Actress – Motion Picture Comedy or Musical. Born Amy Beth Schumer on June 1, 1981 in Manhattan, New York City, New York, USA, to Gordon and Sandra Schumer, she is a 1999 graduate of South Side High School. She received a B.A. in Theater from Towson University. She started her stand-up career in the 2000s. She placed fourth on the fifth season of NBC’s Last Comic Standing, and she placed second on Comedy Central’s Reality Bites Back. She first gained attention on Last Comic Standing. On 13 February 2018, she married chef Chris Fischer. She was previously in a relationship with Ben Hanisch from 2015 to 2017. 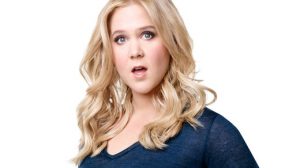 Amy Schumer Facts:
*Her father, Gordon Schumer, was born to a Jewish family. Her mother, Sandra Schumer, converted to Judaism.
*She is the cousin of US Senator Chuck Schumer (D-NY).
*She used to work as a bartender and a waitress.
*She was the host of the 2015 MTV Movie Awards.
*She is a fan of New York Mets.
*She is food friends with David Letterman, and Jennifer Lawrence Brie Larson.
*Judy Gold, Jessica Kirson, Wendy Liebman, Sarah Silverman, Margaret Cho and Ellen DeGeneres are her favorite comedians.
*She was once in a relationship with Dolph Ziggler.
*Visit her official website: www.amyschumer.com
*Follow her on Twitter, YouTube, Google+, Facebook and Instagram.