Amy Smart is an American actress and former fashion model. She is known for her roles in television, such as Felicity, Shameless, Robot Chicken, Smith, Justified, and Stargirl, and in the films Varsity Blues, Road Trip, Rat Race, The Butterfly Effect, Starsky & Hutch, Just Friends, Peaceful Warrior, and Tyler Perry’s comedy The Single Moms Club. Born Amy Lysle Smart on March 26, 1976 in Topanga Canyon, California, to parents Judy Lysle and John Boden Smart, she grew up in Topanga Canyon. She has one brother named Adam. Smart studied ballet for 10 years, and graduated from Palisades Charter High School. She has been married to Carter Oosterhouse since September 10, 2011. Together they have one daughter, Flora Oosterhouse. 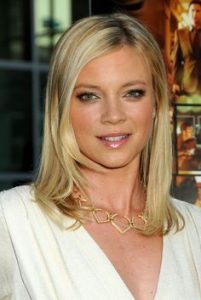 Amy Smart Facts:
*She was born on March 26, 1976 in Topanga Canyon, California, USA.
*Her ancestry includes German, English, Irish, as well as some Dutch, Swiss-German, and Welsh.
*She began her career as a fashion model.
*She ranked #74 in FHM magazine’s “100 Sexiest Women in the World 2006” supplement.
*She is close friends with Ali Larter.
*Follow her on Twitter and Instagram.