American journalist and news anchor who joined CNN in 2008. Baldwin hosts CNN Newsroom from 2pm to 4pm ET. She hosts CNN’s New Year’s Eve Live with Anderson Cooper. Previously, she hosted from Nashville, Tennessee in 2010 and 2011. Born Lauren Brooke Baldwin on July 12, 1979 in Atlanta, Georgia, to parents Christine King Fulton and Steven Robert Baldwin, she did her schooling from The Westminster Schools, a private college-preparatory school, and studied Spanish and journalism at the University of North Carolina at Chapel Hill. She married Jay David in 2011. 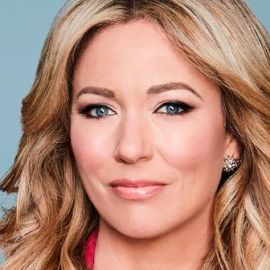 Brooke Baldwin Facts:
*She was born on July 12, 1979 in Atlanta, Georgia, USA.
*She began her career in 2001 at WVIR-TV in Charlottesville, Virginia.
*She has been at CNN since 2008.
*She was a conrtributor to Rick Sanchez’s Rick’s List in 2010.
*She was appeared in a Variety magazine article “Women Surge to Top of TV News in Face of Sexism” in 2017.
*She covered President Trump’s inauguration on January 20, 2017.
*In April 2020, she was diagnosed with COVID-19, days after CNN journalist Chris Cuomo was diagnosed.
*Follow her on Twitter, Facebook and Instagram.