Amy Yasbeck is an American actress of film and television. She is best known for playing the role of Casey Chappel Davenport on the sitcom Wings from 1994 to 1997. She appeared in The Mask with Jim Carrey in 1994. As a contestant, she appeared on the game show Are You Smarter Than a Fifth Grader? in 2010. Born as Amy Marie Yasbeck on September 12, 1962 in Cincinnati, Ohio to Dorothy Murphy and John Yasbeck, she is of Lebanese descent on her father’s side, and of Irish descent on her mother’s side. She married John Ritter in 1999, and they had a daughter named Stella in 1998. 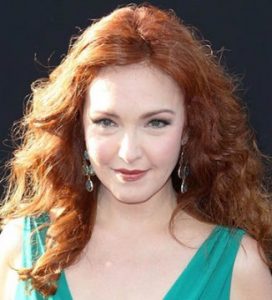 Amy Yasbeck Facts:
*Her mother was of Irish ancestry and her father was of Lebanese descent.
*She moved to New York after losing both of her parents – her mom from emphysema and her father from a heart attack.
*She was appeared in an Easy-Bake Oven advertisement as a child.
*She is close friends with Steven Weber.