Roseanne Barr is an Emmy Award-winning American actress, comedian, director, television producer, writer, and 2012 presidential nominee of the California-based Peace and Freedom Party. She is best known for her role as Roseanne Conner on the hit ABC series, Roseanne, for which she won an Emmy Award and a Golden Globe Award. She has also starred in such films as She-Devil and Look Who’s Talking Too. Born Roseanne Cherrie Barr in Salt Lake City, Utah, to Helen Davis and Jerome Hershel Barr, she belonged to a working-class Jewish family. She attended Salt Lake High School East, but dropped out before graduating. She was married to Ben Thomas (1995-2002), Tom Arnold (1990-1994) and Bill Pentland (1974-1990). 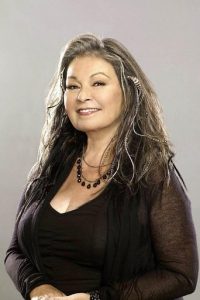 Roseanne Barr Facts:
*Her father, Jerome Hershel Barr, was a salesman and her mother, Helen Davis, was a bookkeeper.
*She was ranked #9 in Comedy Central’s 100 Greatest Stand-Ups of All Time, the highest-ranking woman.
*She used to work as a dishwasher, cook, and waitress for Bennigan’s Restaurant.
*Visit her official website: www.roseanneworld.com
*Follow her on Twitter, YouTube, Facebook and Instagram.