Former professional tennis player who was the first tennis player to have won all Grand Slam tournaments on four different surfaces. Turning professional in 1986, Agassi is an eight-time Grand Slam champion and a 1996 Olympic gold medalist, as well as a runner-up in seven other Grand Slam tournaments. He won his first top-level singles title in 1987 at the Sul American Open in Itaparica and ended the year ranked no.25. Agassi won a gold medal at the 1996 Olympics in Atlanta. 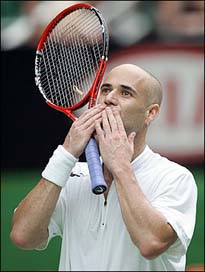 Andre Agassi Facts:
*He was born on April 29, 1970 in Las Vegas, Nevada, U.S.
*At 13, Agassi was sent to a tennis academy in Bradenton, Florida, run by Nick Bolletieri, who later became his coach.
*He dropped out of high school in 9th grade to pursue tennis.
*He turned professional at the age of 16.
*He won his first Grand Slam title at Wimbledon in 1992.
*He reached the world No. 1 ranking for the first time in April 1995.
*He was the first tennis player to have won all Grand Slam tournaments on four different surfaces.
*He was inducted into the International Tennis Hall of Fame in 2011.
*He became the world No 1 again in 1999 and competed in grand slam tournaments for another seven years.
*He is married to former women’s number one tennis player Steffi Graf.
*Follow him on Twitter, Facebook and Instagram.