Andrew Garfield is a British American actor born in Los Angeles, California. He is most famous for his portrayal of Spider-Man in the 2012 blockbuster The Amazing Spider-Man and in its 2014 sequel, The Amazing Spider-Man 2. He played Eduardo Saverin in the drama films The Social Network, for which he received Golden Globe and BAFTA nominations. He also earned an Academy Award nomination for his role in Hacksaw Ridge. For his role in the 2007 film Boy A, he won a British Academy Television Award for Best Actor. Born Andrew Russell Garfield on August 20, 1983 in Los Angeles, California, to Lynn and Richard Garfield, Andrew Garfield moved to Surrey, U.K., with his parents and older brother at age 3. He belongs to English and Polish-Jewish heritage. He trained at the Center for Speech and Drama at the University of London. He was in a relationship with Shannon Woodward from 2008 to 2011, and with Emma Stone from 2011 to October 2015. 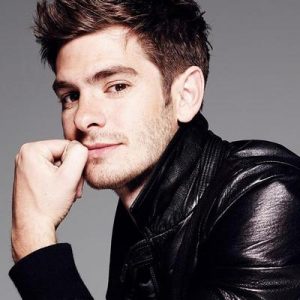 Andrew Garfield Facts:
*His mother is a nursery school assistant and his father is a swimming coach.
*He was named “Top 10 actors to watch” by Variety Magazine in 2007.
*He was a big fan of Spider-Man long before portraying the part.
*He was featured in Vogue’s December 2009 issue.
*He is a dual American/British citizen.
*He is close friends with Jesse Eisenberg, Robert Pattinson and Matt Smith.
*Follow him on LinkedIn.