Angel Coulby is an English actress of stage, film and television. She is best known for her portrayal of Guinevere “Gwen” in the BBC fantasy series Merlin. Other notable television roles include Jessie Taylor in Dancing on the Edge, Laura Roebuck in The Tunnel, and Detective Inspector Cathy Hudson in Innocent. Coulby provided the voice of Tanusha “Kayo” Kyrano in ITV’s remake of Gerry Anderson’s puppet series Thunderbirds Are Go. Her theater credits include Lavender Blue, Statement of Regret, and Albion. Born Angel Leonie Coulby on August 30, 1980 in London, United Kingdom, she is of Guyanese lineage descent on her father’s side, and of English descent on her mother’s side. She studied drama at Queen Margaret College, Edinburgh. She has a son. 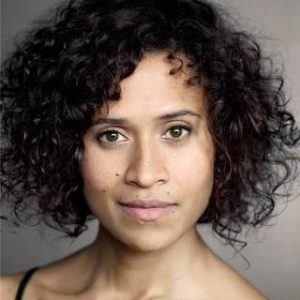 Angel Coulby Facts:
*She was born on August 30, 1980 in London, United Kingdom.
*She studied acting at Queen Margaret University.
*She made her television debut in the BBC comedy ‘Orrible.
*She played the lead role of Guinevere “Gwen” in BBC’s drama Merlin from 2008 to 2012.
*Her favorite films are Labyrinth and The Wizard of Oz.
*She learned how to play the guitar.
*Her hobbies include cooking, tailoring, and music.