Angie Everhart is an American actress and former model. She is best known for her appearances in Sports Illustrated and Playboy. Her film appearances include Wicked Minds, Love in Paris, Take Me Home Tonight and Bordello of Blood. Born Angela Kay Everhart on September 7, 1969 in Akron, Ohio, USA, to Ginnie and Bob Everhart, she started modeling at age 16. She belongs to German and English descent. As a teen, she posed for fashion magazines such as Glamour and Elle. She married Carl Ferro in 2014. She was previously married to Ashley Hamilton from 1996 to 1997. 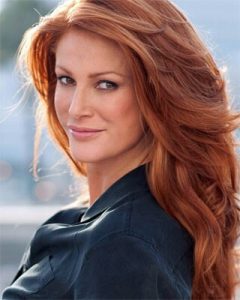 Angie Everhart Facts:
*She started modeling at the age of 16.
*She posed nude for Playboy in 2000.
*She is an avid skydiver.
*She speaks English and French fluently.
*She was ranked #98 on the FHM 100 Sexiest Women of 2003.
*She was once engaged to millionaire businessman Jimmy Traboulis.
*She has been linked romantically with Howard Stern, Sylvester Stallone, Kevin Costner and even Prince Andrew.
*Visit her official website: www.angieeverhart.com
*Follow her on Twitter.