Samantha Cole is an American singer, songwriter, and actress, who rose to fame after appearing on the MTV dance show The Grind, which led to her soon becoming a regular performer at Tatou in New York City. She is best known for the hit songs “Happy with You,” “Without You” and “You Light Up My Life”. She is best known by the public for her work on MTV’s The Grind. Her self-titled debut album, Samantha Cole, was released on September 23, 1997. Born on October 19, 1978 in Southampton, New York, USA, she started taking vocal lessons at the age of 15, and landed a number of singing engagements in New York. She also began her acting career, appearing in an episode of HBO’s Sex and the City, the WE network reality show, Single In the Hamptons, and the Damon Dash’s 2003 film, Death of a Dynasty. 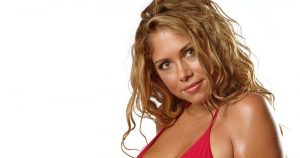 Samantha Cole Facts:
*She was born and raised in Southampton, New York.
*Her self-titled debut was released in 1997.
*She was cast as a Judge on The Voice in 2014.
*Her song “Bring It To Me” was included on the soundtrack to the television show Dark Angel in 2002.
*Visit her official website: www.samanthacole.com
*Follow her on Myspace.