Anna Kendrick is an American actress, best known for starring in the Pitch Perfect film series, The Twilight Saga, and Up in the Air. Her other notable film roles include Into the Woods, Mike and Dave Need Wedding Dates, Scott Pilgrim vs. the World, 50/50, End of Watch, The Accountant, Cake, A Simple Favor, and Noelle. Her television credits include Dummy and Love Life. Born Anna Cooke Kendrick on August 9, 1985 in Portland, Maine, to parents Janice and William Kendrick, she belongs to English, Irish, and Scottish descent. She has an older brother, Michael Cooke Kendrick, who is an actor. Kendrick was educated at Longfellow Elementary School and Deering High School. She has been dating cinematographer Ben Richardson. She was previously in a relationship with director Edgar Wright from 2009 to 2013. 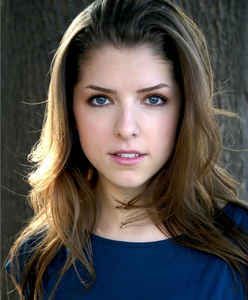 Anna Kendrick Facts:
*She was born on August 9, 1985 in Portland, Maine, USA.
*She is of Irish, English, and Scottish descent.
*She received a Tony nomination for her starring role in the Broadway musical High Society in 1998.
*She made her film debut in Camp (2003).
*She is the Spokesperson for Hilton Hotels.
*Follow her on Twitter, YouTube, Facebook and Instagram.