Anna Silk is a Canadian actress. She is best known for her lead role as Bo in the hit TV show “Lost Girl.” She played Cassidy Holland in the comedy-drama television series, Being Erica, for which she earned a Gemini Awards nomination in 2009. Born on January 31, 1974 in Fredericton, Canada, to Ilkay and Peter Silk, her father is British and her mother is of Turkish-Cypriot descent. Her sister Mandy Silk, is a musician. Silk is a St. Thomas University graduate with a Bachelor of Arts degree. She has been married to Seth Cooperman since 2009. They have two sons, Samuel and Levi. 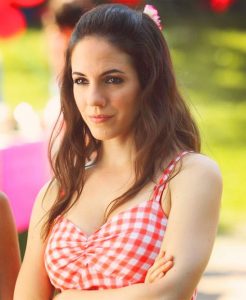 Anna Silk Facts:
*She was born on January 31, 1974 in Fredericton, Canada.
*Her mother is of Turkish-Cypriot descent.
*She is fluent in English and French and a bit of Spanish.
*She was cast in at least two productions at the St. Thomas Theatre, “Seven Menus” and “The Kitchen.”