Mindy Kaling is an American actress and comedian who first gained recognition for her role as Kelly Kapoor in the NBC sitcom The Office, for which she earned six Emmy Award nominations. She gained much popularity through creating, writing, producing and starring in her own television show, The Mindy Project (2012–17). She has also done voice work in the films Despicable Me, Wreck-It Ralph and Inside Out. In 2011, Kaling published her New York Times best-selling memoir, titled Is Everyone Hanging Out Without Me?. Born Vera Mindy Chokalingam on June 24, 1979 in Cambridge, Massachusetts, USA to Swati Roysircar and Avu Chokalingam, she belongs to Indian descent. Her father was an architect while her mother was a doctor. She has an older brother named Vijay. After graduating from Buckingham Browne & Nichols in Cambridge, Massachusetts, in 1997, she attended and graduated from Dartmouth College in 2001, with a bachelor’s degree in playwriting. She has a daughter, Katherine Kaling, born in December 2017. 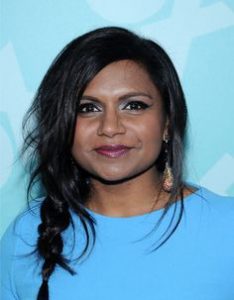 Mindy Kaling Facts:
*She was born on June 24, 1979 in Cambridge, Massachusetts.
*She is the daughter of Tamilian father and Bengali mother.
*Her family immigrated to the US in 1979.
*She lost her mother in 2012 due to pancreatic cancer.
*She was named after the TV show Mork & Mindy.
*She cites Conan O’Brien as big influences.
*Time Magazine named her one of the top 100 Most Influential People in the World in 2013.
*Glamour magazine named her Women of the Year in 2014.
*She won Gracie Award in 2014.
*She is a 1% owner of English football club Swansea City A.F.C.
*She is close friends with Web analyst and actor David Harris
*Visit her official website: www.theconcernsofmindykaling.com
*Follow her on Twitter, Facebook and Instagram.