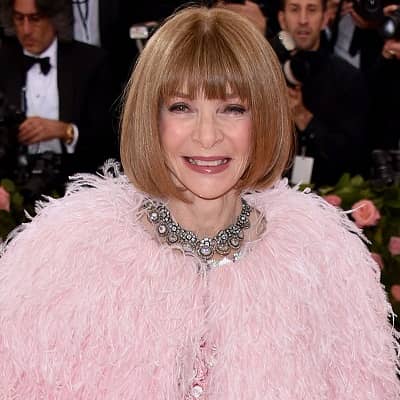 Anna Wintour is a British-American journalist who is the editor-in-chief of American Vogue, a position she has held since 1988. She has also served as Global Chief Content Officer for Condé Nast since 2020. She is also the Artistic Director of Condé Nast and the Global Editorial Director of Vogue.

Born on November 3, 1949 in London, United Kingdom, to parents Charles Wintour and Eleanor Trego Baker, her parents were married in 1940 and divorced in 1979. She was named after her maternal grandmother, Anna Baker (née Gilkyson), a merchant’s daughter from Pennsylvania.

She had two children — Katharine and Charles — with her husband David Shaffer whom she married from 1984 to 1999.

Anna Wintour Facts:
*She was born on November 3, 1949 in London, United Kingdom.
*Her ancestry includes English, Scottish, distant Dutch, and remote French Huguenot.
*She started wearing her trademark bob hairdo at the age of 14.
*She began her career in the fashion industry by working at London’s Biba boutique at fifteen.
* In July 1988, Wintour was named editor-in-chief of Vogue.
*She was awarded the OBE (Officer of the Order of the British Empire) in the 2008 Queen’s Birthday Honors List for her services to British journalism and British fashion in the USA.
*She is good friends with Roger Federer and she attended some of his matches at the US Open.
*She is a huge fan of Game of Thrones.
*She counts Scarlett O’Hara as the most fashionable literary figure.