American actress Annabeth Gish, who appeared in such television series as The Bridge, The West Wing, Brotherhood, The X-Files and the final season of Sons of Anarchy, and Gotham, and in the films Mystic Pizza, Shag, Hiding Out, SLC Punk!, The Last Supper and Double Jeopardy. Annabeth was born as Anne Elizabeth Gish in Albuquerque, New Mexico, and was raised in Cedar Falls, Iowa. She is the daughter of Judy and Robert Gish, and has a sister Robin and brother Timothy. She has been married Wade Allen since 2003. They have two sons, Cash and Enzo. 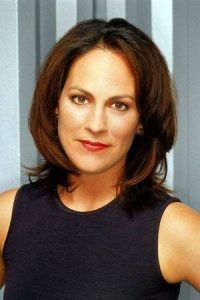 Annabeth Gish Education:
She attended and graduated from Northern University High School in 1989 .
She earned her bachelor’s degree in English from Duke University in July 1993.

Annabeth Gish Facts:
*She was born in Albuquerque, New Mexico and raised in Cedar Falls, Iowa.
*She moved to Cedar Falls, Iowa with her family at age 2.
*Her father was an English professor, and her mother was an elementary school teacher.
*Follow her on Twitter, Facebook and Instagram.