Annalise Basso is an American film and television actress and model. She has starred in such films as Bedtime Stories, Love Takes Wing, Standing Up, Oculus, and Ouija: Origin of Evil. From 2014 to 2015, Basso played Kate Jensen in the television series The Red Road. 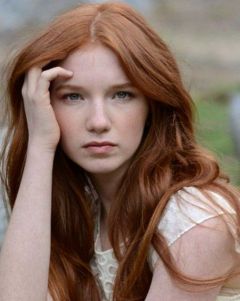 Born Annalise Nicole Basso on December 2, 1998 in St. Louis, Missouri, she is the youngest child of Marcia and Louis J. Basso. Her older siblings, Gabriel Basso and Alexandria Basso, are also actors. Basso graduated from Campbell Hall School in Studio City, Los Angeles. She achieved fame with her role as Eden Hamby on True Blood.

Annalise Basso Facts:
*Born on December 2, 1998 in St. Louis, Missouri, she is of Italian, German, English and Irish descent.
*She got her breakthrough at the age of 10 after appearing on the TV game show, Are You Smarter Than a 5th Grader?
*She made her film debut in film Ghost Image (2007).
*She was cast in the role of Paulina Zander in the 2016 horror movie, Ouija: Origin of Evil.
*Follow her on Twitter and Instagram.