Catherine Bach is an American actress best known for her role as Daisy Duke in the television series The Dukes of Hazzard (1979). She is also known for her role as Margo Dutton in African Skies (1992). Catherine was born in Warren, Ohio, and grew up in South Dakota. Her father, Bernard Bachman, was of German ancestry and her mother, Norma Jean Kucera Verdugo, was of Mexican descent. She has a brother, Philip Bachman. She was previously married to the now-deceased Peter Lopez, and they had two daughters named Sophia and Laura. 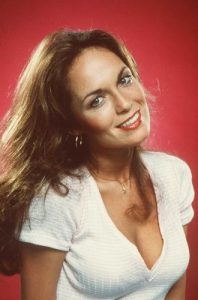 Catherine Bach Facts:
*She belongs to German and Mexican descent.
*Her father had German ancestry and her mother had Mexican ancestry.
*Her first screen appearance was in The Midnight Man, a Burt Lancaster murder mystery shot in 1973.
*Follow Catherine Bach on Twitter.