Spanish actor, director and producer who has starred in such films as Philadelphia, SPY kids, Interview with the Vampire, And Starring Pancho Villa as Himself, Tie Me Up! Tie Me Down!, Desperado, Assassins, Pain and Glory, Evita, and The Mask of Zorro. In 2003, Banderas appeared as Guido Contini in the Broadway revival of Maury Yeston’s musical Nine. He voiced Puss in Boots in the Shrek film series. Banderas is the recipient of various accolades including; a Cannes Best Actor Award and nominations for a Tony Award, an Academy Award, two Primetime Emmy Awards and five Golden Globe Awards. Born José Antonio Domínguez Bandera on August 10, 1960 in Málaga, Spain, to Ana Bandera Gallego and José Domínguez, he has one younger brother named Francisco. He attended and graduated from the School of Dramatic Art in Málaga, Spain. He was married to Ana Leza from 1987 to 1996 and Melanie Griffith from 1996 to 2015. He has a daughter named Stella, with his second wife Melanie Griffith. 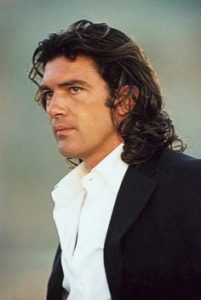 Antonio Banderas Facts:
*He was born on August 10, 1960 in Málaga, Spain.
*Growing up, he wanted to become a professional football player.
*He made his Hollywood debut with The Mambo Kings (1992).
*Empire magazine named him one of the 100 Sexiest Stars in film history (#24) (1995).
*People Magazine named him one of the top 50 Most Beautiful People in the World in 1996.
*He has his own perfume/cologne brand for men – “Blue Seduction Woman”.
*He is a supporter of the Málaga soccer team.
*Visit his official website: www.antoniobanderas.me
*Follow him on Twitter, Facebook and Instagram.