Katy Tur is an American broadcast journalist who works for NBC News, based in New York City. Katy is a University of California graduate with a degree in Philosophy. She has reported for KTLA, News 12 Brooklyn, HD News/Cablevision, WPIX-TV, and Fox 5 New York. Katy was born Katharine Bear Tur on October 26, 1983 in in Los Angeles, California, U.S. to journalists parents Zoey Tur and Marika Gerrard. She has a brother, James. She is currently engaged to Tony Dokoupil, a CBS News reporter. She was previously in a relationship with sports and political commentator Keith Olbermann from 2006 to 2009. 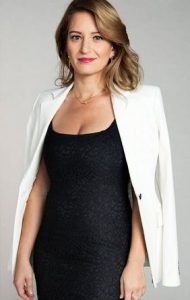 Katy Tur Facts:
*She is the daughter of Journalists Hanna Zoey Tur and Marika Gerrard.
*Began her career working at WPIX-TV.
*Currently, working at NBC News as a correspondent.
*She has one brother named James Tur.
*Follow her on Twitter.