Anushka Sharma, born 1 May 1988, is an Indian actress and model who has starred in such films as Rab Ne Bana Di Jodi, Band Baaja Baaraat, Ladies vs Ricky Bahl, Jab Tak Hai Jaan, PK, and Dil Dhadakne Do. Anushka had her film debut in Aditya Chopra’s Rab Ne Bana Di Jodi in 2008. She was born in Ayodhya, Uttar Pradesh, the daughter of Ajay Kumar Sharma, an army officer, and Ashima Sharma, a homemaker. She has an elder brother, Karnesh. In 2013, she began dating cricketer Virat Kohli; the couple soon earned the celebrity couple nickname “Virushka”. They married on 11 December 2017 in a private ceremony in Florence, Italy. 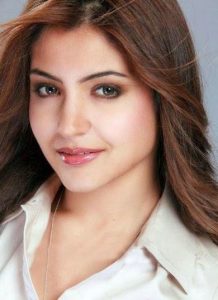 Anushka Sharma Facts:
*Her modeling career commenced with Lakme Fashion Week where she walked for designer Wendell Rodricks.
*Her father is a native of Uttar Pradesh, while her mother is a Garhwali.
*She likes reading books, and sleeping in her free time.
*Her hobbies are Reading and dancing
*Her beauty icon is Madhuri Dixit.
*She is married to the cricketer Virat Kohli.
*Follow her on Twitter, Facebook and Instagram.