Ariel Winter is an American actress and voice actress. She is best known for playing the role of Alex Dunphy in the comedy series Modern Family since 2009. She has also done voice work in the Disney Junior show Sofia the First and the 2014 animated film Mr. Peabody and Sherman. Born Ariel Winter Workman on January 28, 1998 in Fairfax, Virginia, to Crystal and Glenn Workman, she belongs to Greek, German, Slovak and English descent. Her siblings are Shanelle Workman and Jimmy Workman, who are both actors. She first appeared on the small screen at age six in a Cool Whip television commercial. She began dating Levi Meaden in 2016. 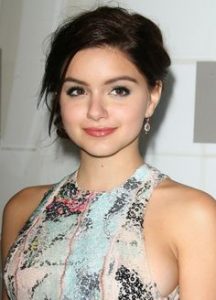 Ariel Winter Facts:
*She has English, German, Greek, and Slovak ancestry.
*She has a purple belt in the Korean martial arts Taekwondo.
*She started acting at the young age of four.
*She has three dogs named Peebles, Cher and Hercules.
*Track, soccer and tennis are her favorite sports.
*Visit her official website: www.arielwinter.net
*Follow her on Twitter, Facebook and Instagram.