Sridevi was an Indian film actress who performed in Tamil, Malayalam, Telugu, Hindi, and Kannada films. She was regarded as the first female “superstar” of India. She won five Filmfare Awards: three for Hindi films and one each for Telugu and Tamil films. She was awarded the Padma Shri, India’s fourth-highest civilian award, by the Government of India in 2013. She is best remembered by the public for her roles in the films Mawaali, 16 Vayathinile, Naya Kadam, Sigappu Rojakkal, Varumayin Niram Sivappu, Nazrana, Mr. India, Meendum Kokila, Premabhishekam, Moondram Pirai, Maqsad, Masterji, Tohfa, Waqt Ki Awaz, Chandni, Aakhari Poratam, Jagadeka Veerudu Atiloka Sundari, Kshana Kshanam, Nagina, Sadma, ChaalBaaz, Laadla, Khuda Gawah, Gumrah, Lamhe and Judaai. Born Shree Amma Yanger Ayyapan on August 13, 1963 in Sivakasi, India, Rajeswari and Ayyapan Yanger, she has a sister and two stepbrothers. She worked in her first Tamil film at age four and won a Best Child Artist Award in 1967. She married film producer Boney Kapoor in 1996. They had two daughters, Jhanvi and Khushi. She was previously married to actor Mithun Chakraborty from 1985 to 1988. She died of cardiac arrest in Dubai at age 54. 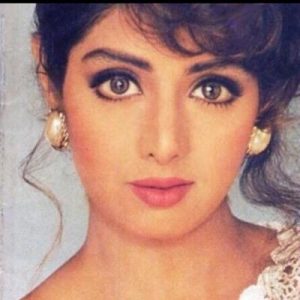 Sridevi Facts:
*She was born to Tamil father Ayyapan and Telugu mother Rajeswari.
*She began her career as a child actor at the age of four, appearing in the Tamil movie Thunaivan.
*She was the highest paid Hindi actress from 1985-1992 and the 2nd highest paid Hindi actress from 1993-1996.
*She was fluent in Tamil, Telugu, Hindi, and English.
*She could not speak Hindi when she stepped into the Hindi film industry.
*Her comeback was with English Vinglish in 2012.