Ashley Boettcher is an American actress and voice actress. She is best known for her portrayal of Mel Fuller in the Amazon Studios Original Series Gortimer Gibbon’s Life on Normal Street. Boettcher appeared in the 2009 film Aliens in the Attic as Hannah Pearson. She has also done voice work in Lost in Oz, X-Men: First Class, Twelve Forever, Summer Camp Island, Happy Feet Two, and Shrek Forever After. She has made guest appearances in a number of television shows such as Las Vegas, Shake It Up, About a Boy, and I Think You Should Leave with Tim Robinson. 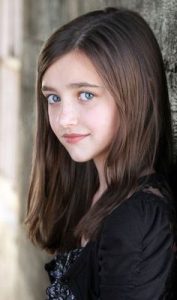 Ashley Boettcher Facts:
*She was born on September 3, 2000 in Texas, USA.
*She started participating in dance competitions at the age of 2.
*Starting at age 5, Boettcher began acting.
*She played Mel Fuller in the Amazon series Gortimer Gibbon’s Life on Normal Street.
*Visit her official website: www.ashleyboettcher.com
*Follow her on Twitter, Facebook and Instagram.