Chandler Kinney is an American actress. She is best known for her role as Catherine Dillman in the Amazon Studios Original Series Gortimer Gibbon’s Life on Normal Street. She is also known for starring as Willa Lykensen in the Disney movie Zombies 2. Kinney portrayed Riana Murtaugh, Det. Murtaugh’s teenage daughter in the Fox action comedy-drama television series Lethal Weapon. She has also appeared as a guest-star in several television series such as 90210 and American Horror Story. 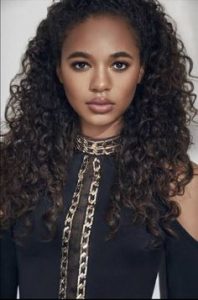 Chandler Kinney Facts:
*Born on August 3, 2000 in Sacramento, California, she has two older brothers.
*Starting at age 3, Kinney began dancing.
*She began training in martial arts at age 10, and received her 1st degree black belt at age 13.
*She made her professional acting debut with a feature film role in Battlefield America in 2012.
*She was named to perform in a piece by Joss Whedon entitled “When I Speak” in 2014.
*Follow her on Twitter and Instagram.