Ashlie Atkinson is an American actress of theatre, film and television. Her notable acting roles include Ace on Happy!, Peaches in the Netflix film Juanita, as Connie in the Spike Lee film BlacKkKlansman, and Janice in the last season of Mr. Robot. In 2015, Atkinson won a Theatre World Award for her off-Broadway debut in the play Fat Pig. Born Ashley Elizabeth Atkinson on August 6, 1977 in Little Rock, Arkansas, her father was a doctor and her mother was a nurse. Atkinson graduated from Pulaski Academy in Little Rock, Arkansas in 1995, and attended Barnard College in New York City for three semesters. In 2001, she graduated from Hendrix College with a degree in theater arts. She is married to gaffer, musician, and filmmaker Leon Chase. 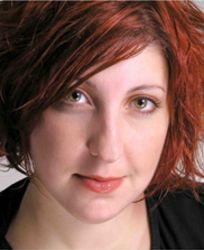 Ashlie Atkinson Facts:
*She was born on August 6, 1977 in Little Rock, Arkansas, USA.
*She is a 2003 graduate of the Neightborhood Playhouse.
*She won a 2005 Theater World Award for her performance for originating the role of Helen in Neil Labute’s “Fat Pig”.
*Visit her official website: www.ashlieatkinson.com
*Follow her on Twitter, Facebook and Instagram.