Ashley Jones is an American television actress best known for her portrayal of Megan Dennison on the soap opera The Young and the Restless, for which she received two Daytime Emmy Awards nomination. She played Dr. Bridget Forrester on The Bold and the Beautiful. Ashley was born on September 3, 1976 as Ashley Aubra Jones in Memphis, Tennessee, USA. She married Joel Henricks in 2015. They have one child. She was previously married to Noah Nelson from 2003 to 2009. 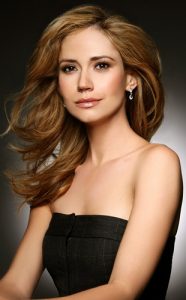 Ashley Jones Facts:
*Her father, Shawn Jones, is a minister.
*She began her acting career in 1993, debuting in an episode of Dr. Quinn, Medicine Woman.
*She had a recurring role as Daphne on HBO drama series True Blood in 2009.
*Her ex-husband Noah Nelson is the son of COACH star Craig T. Nelson.
*She is friends with Olympic gold medalist, ice-skater Tara Lipinski
*Follow her on Twitter and Instagram.