Ben Roethlisberger is an American football quarterback for the Pittsburgh Steelers of the National Football League. He was the youngest starting quarterback to win a Super Bowl when the Pittsburgh Steelers defeated the Seattle Seahawks in 2006. He ranks eighth for most consecutive NFL games (30) with a touchdown pass. Ben was born on March 2, 1982 in Lima, Ohio, USA. He is the son of Ida Jane and Kenneth Todd “Ken” Roethlisberger, a former pitcher and quarterback at Georgia Tech. He has a younger sister named Carlee Roethlisberger, who was one of Ohio’s top basketball players before committing to Oklahoma. In 2011, he married physician’s assistant Ashley Harlan. They have three children: daughter, Baylee Marie, and two sons, Bodie, and Benjamin. 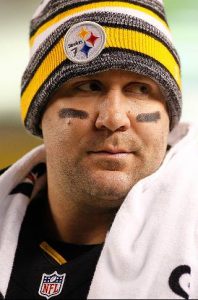 Ben Roethlisberger Facts:
*His mother, Ida, passed away when he was 8 years old.
*He has his own line of barbecue sauce, Big Ben’s BBQ.
*He was the captain of his baseball, basketball, and football teams at Findlay High School in Findlay, Ohio.
*He ranks eighth for most consecutive NFL games (30) with a touchdown pass.
*Follow him on Twitter and Facebook.