Ashley Leggat is a Canadian actress. She is best known for her portrayal of Casey McDonald in the Canadian family comedy series Life with Derek, and for her role as Ashley Dunnfield in the television movie The Perfect Roommate. She was a recurring character on “Darcy’s Wild Life” (Sara Paxton), a regular on the new genre TV series “11 Cameras”, and guest starred on “The Latest Buzz”, “Aaron Stone”, and “Unnatural History”. 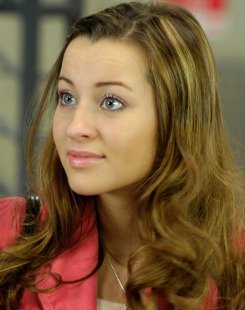 Ashley Leggat Facts:
*Born on September 26, 1986 in Hamilton, Canada, she is the youngest of five children and the only daughter.
*She used to be a dancer.
*She began her theatrical training with Theatre Aquarius’s Performing Arts Program under the direction of Lou Zamprogna.
*She starred as Casey McDonald on the Disney Channel series Life with Derek from 2005 to 2009.
*She is close friends with her Life with Derek co-star Michael Seater.
*Her favorite actors are Johnny Depp and Nicole Kidman.
*Her favorite band is The Racket.
*Her favorite sport is hockey.
*She is a supporter of Count Me In, the largest youth-led movement of its kind.
*She has 3 cats named Baby, Punk, and Furbee.
*Visit her official website: www.ashleyleggat.net
*Follow her on Twitter, Facebook and Instagram.