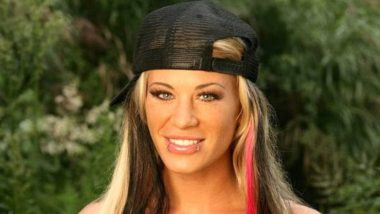 Ashley Massaro was an American professional wrestler, reality television contestant, television host, model and radio personality. Born into a family of wrestlers, Massaro was best known for her time with World Wrestling Entertainment and for her appearance on Survivor: China. She won the WWE Diva Search in 2005. Massaro’s most high-profile matches were a WWE Women’s Championship match against Melina at WrestleMania 23 and a Playboy Bunnymania Lumberjill match at WrestleMania XXIV. She appeared in numerous magazines, including the April 2007 issue of Playboy.

Ashley Massaro Facts:
*She was born on May 26, 1979 in Babylon, New York, USA.
*She grew up in a wrestling family as her brother, her father and her uncle all competed in the sport.
*She earned her Bachelor of Science degree in Commnuications with a minor in Business from New York State University.
*She spent her early twenties as a bikini and adult model before turning to professional wrestling.
*She made her debut in WWE after winning the WWE Diva Search in 2005.
*She won the 2005 $250,000 Raw Diva Search.
*She was good friends with fellow WWE Diva Trish Stratus and Amy Dumas (Lita).
*Her hobbies include Waverunning, traveling, boating, fishing, biking, riding motorcycles, beach volleyball.
*She was a huge fan and friend of the punk rock band Aiden.
*She had a black and pink nautical star tattoo on each elbow; this is where the name for her elbow-drop finisher (star struck) comes from.
*She was romantically tied to wrestlers Paul London and Matt Hardy, and she also dated musician Chuck Comeau.